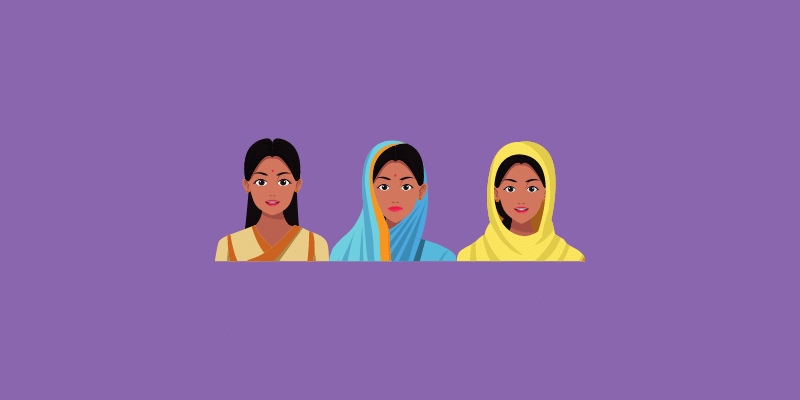 Off the Grid: Education in the 'New Normal' for Women

By Ayesha Selwyn and Suprerana Chakraborty

“My father has a phone but he takes it when he goes out. He only comes home at night. He keeps the phone to himself only.”

This is the experience of hundreds of thousands of Indian women, who do not have access to personal devices and whose phone time is regulated by their families. Stereotypical social norms, persistent cultural barriers, economic considerations intertwined with the preservation of patriarchal authority within households have time and again prevented women from channelling their own agency and independence. This is further evident in their access, or lack thereof, to using mobile technology. Before we speak of the gender implications of digital inequalities, it is time to take a step back and see where it stems from: limited access to phones, and the internet, especially in rural Indian communities.

Access and ownership of mobile phones is grim in rural India where socio-economic barriers are stark - there are 56 telephone subscriptions for every 100 people (as compared to 97 in urban areas) according to TRAI annual report 2018-19. Not only is phone connectivity non-existent for almost half the rural population, but the gender gap in phone ownership also leaves women in rural India at a further disadvantage. A study by John F. Kennedy School of Government at Harvard University found out that no more than 38% of women in India own mobile phones, compared with 71% of men. Of course, this figure varies widely across different socio-economic groups, states and regions - urban and rural. However, it emerges from the study that the gender disparity in mobile ownership exists across Indian society and is not restricted to poorer, less educated groups. This study captured that the sentiments against women owning a mobile phone were more prevalent in rural communities than in urban areas. Hence, it is no secret that limited phone access is a widely prevalent challenge for women, especially if they are from rural or under-resourced communities.

In early 2020, the Covid-19 pandemic had debilitating social and economic impacts, and managed to deepen inequalities for digital access, highlighting the challenge more prominently than ever. It rattled the existing educational structures to their core, bringing to the forefront the challenges that school closures and subsequent move to online classes could inflict among a large section of the population who have been persistently deprived of entering the digital realm.

The education sector in India has always faced challenges arising from social and economic inequalities. Structural imbalances with respect to class, caste, language, region, developmental and gender plague our society, and are reflected in access to, quality of and outcomes from education. In recent years, and especially in the wake of the pandemic, the digital divide has become a prominent issue in education, as well. The digital divide comes in two-fold: economic conditions deter significant numbers of families from owning phones. Smartphones are even more expensive, and internet subscriptions are an additional cost. This, coupled with weak connectivity in rural areas, leaves learners in rural India at a disadvantage.

Students across geographies and grades were affected by the pandemic. But the stakes were higher for those who were preparing for board examinations. Despite all these challenges, over 2,000 women from Sitapur, Uttar Pradesh, who were enrolled in the Digital School Project (co-designed by Pratham Education Foundation and Education Above All Foundation) continued to pursue their studies for the Grade 10 final examination. They are out-of-school learners who had previously discontinued studying due to a host of socio-economic reasons. However, they made the decision to give formal education another chance by enrolling into this program, which was initiated just a few months before the pandemic stopped the world in its tracks. In this program, before the onset of the pandemic, the students self-organised in peer groups and studied together within their hamlets. Once or twice a week they would meet their facilitator at the village centre. All through the week, students had access to digital learning content available offline on shared Android tablets.

When a countrywide lockdown was announced in India following the spread of the pandemic, the DSP witnessed changes to what was originally planned, because, after all, it had to adjust to the ‘new normal’. The students now had to strictly study from the confines of their homes. Hence, the very first activity was to immediately map every student to a device they had access to – smartphone, regular phone, or feature phone. This was to understand the availability of phones in the village, including the type of phones students had access to.It turned out that in a sample of approximately 1,500 students, only 5% of students had their own phones. 91% of students used the phone that belonged to someone else in their house, and 4% of students used their neighbours’ phones. 82% of students had access to basic phones (no internet). It is to be noted here that having access is not the same as having ownership.

Accessing someone else’s phone, rather than owning a phone, naturally has adverse implications for one’s independence and agency. Since 95% of women in the DSP did not have access to personal phones, it was important to ensure that they had adequate familial support so they could continue their endeavour to prepare for the examination. The students are between 10 to 30 years old, and some of them are married. Their families were apprehensive about their phone interactions. The apprehensions arose from female students interacting with male facilitators over long hours in the evening. The families were skeptical of young women (married or unmarried) using mobile phones for any purpose, for longer than a few minutes, especially after dark. Familial support was key to the sustenance of the program for two reasons: it is the only way to reach students, and it motivates students to study. Hence the program facilitators spoke to the families at length, and explained to them the importance of staying in touch through mobile phones during these unforeseen times. By informing the families about the call schedule and the frequency of messages they would be sending, the facilitators gradually gained their trust. Parents and spouses soon became supportive of the students communicating with the facilitators and aided uninterrupted interactions between them. Stereotypical patriarchal attitudes leading to lack of familial support often cause women to drop out of the formal education system. Therefore, it was of utmost importance to gain the families’ trust and explain the purpose of the phone interactions because Pratham shared learning content and delivered lessons through SMS and phone calls.

The efforts yielded results, and we take this opportunity to pen their journey down of studying through the pandemic. These women are now closer to appearing for their Grade-10 examination this year. The students were able to pursue their studies through this uncertain time due to the nature of the DSP. The DSP is designed to accommodate students, especially women, who may not be able to leave their village to go to school every day due to monetary, familial and time constraints.

More often than not, alternative schooling options do not offer the kind of flexibility and personalisation that the DSP does, which contributed to the sustainability of the program during the pandemic. It is of utmost importance that new forms of education are able to alter patterns of gender socialization, overcome challenges posed by the digital divide, and offer the space to women where they move beyond the power of entrenched structural imbalances, and significantly refashion their realities.

Ayesha leads the Research and Analytics projects at Pratham Digital. She is passionate about the development space, and wants to leverage data to tell stories and motivate action.

Suprerana is currently associated with the Digital Innovations team at Pratham, and is an alumnus of Tata Institute of Social Sciences. A firm believer in social equality and agency, she has extensive experience in interdisciplinary research and government consulting.