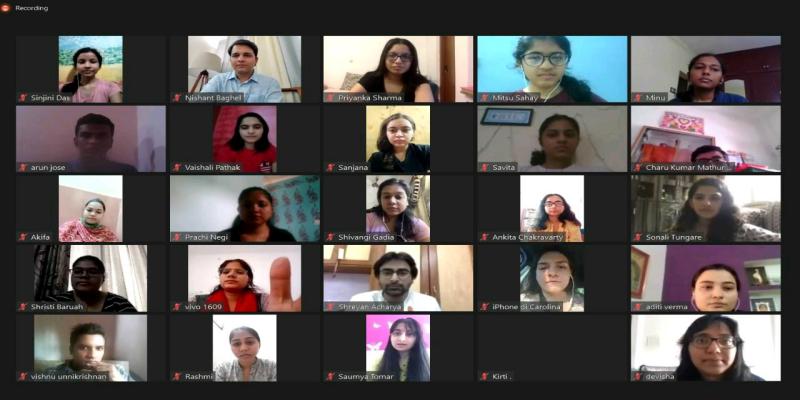 An Opportunity during the Times of Adversity: EdTech Internship

Around mid-July, the Digital team at Pratham rolled out a call for interns to support the on-going projects and initiatives in EdTech, and to ensure that the interns get a hands-on experience in education’s new normal. The team eventually ended up having an extremely rewarding experience to get to know over a hundred applicants. This is when the idea of establishing a formal Remote EdTech Internship Programme emerged. It was going to be completely virtual - after all, internships also had to adapt to the unprecedented challenges thrown in by the Covid-19 crisis.

Internships provide a plethora of opportunities to the host company in terms of effectively engaging young talent, and readying them to hone skills which they can apply for future work, and ensuring that they find contacts that remain for the rest of their career. Sometimes, an internship eventually turns into a big break in the career trajectory of the individual. Keeping in mind the same, Pratham did not want a pandemic to dampen the internship season. Over the summer, the team had effectively managed to engage a bunch of young enthusiastic interns who were working from the confines of their homes, and getting a holistic experience on EdTech. However, receiving the hundred applicants motivated the team to scale up the initiative and create a formal programme.

Eight different tracks such as, ML/AI, Content, Communication and Design, Video-Editing and Filmography etc., were created under this programme, so that the interns had the opportunity to select from a variety of aspects in EdTech that they could be interested in. Of course, the idea of restricting the internship to merely performing tasks did not sit well with the team. Hence, activities, such as sharing learning materials on EdTech every Tuesday, and webinars on different aspects of digital education every Friday also became a major part of the programme.

The advent of August saw 40 fervent interns join the Digital team under various tracks for a period of eight weeks. To be honest, making this a worthwhile experience for 40 interns working from home takes significant effort. This would not have been possible without support from the entire team involved at large. It became as much of a learning experience for the team at Pratham as it was for the interns, if not more.

In this on-going internship format, the interns are grouped according to the track that they choose to explore, and each group has their assigned Project Coordinators from the Pratham team who are involved in the existing domains of work. The Project Coordinators have faced the overwhelming yet achievable (as demonstrated in the last two months) challenge of scheduling work for the interns, encouraging innovative ideas, and trying to create a productive work environment, as close as possible, virtually. The interns work closely with their respective Coordinators to fulfil their internship objectives based on their interests to build particular skill sets that they deem would help them in their career trajectory.

Apart from their regular flow of work, the Friday webinars witness domain experts, from internal teams, such as technology, data, content, hosting sessions on subjects of interest to appeal to the curious minds of every intern. On Saturdays, as a close to the week, the interns are encouraged to participate in a stress-free activity so that they can unwind after a week of working hard on their respective projects. It was important for Pratham to create a sort of office break-room where the interns can engage with each other, and feel connected to the programme even from within the four walls of their homes. Hence, the Saturday activity over WhatsApp became a significant part of the Internship Programme.

The interns from the August cohort, that recently completed their term with us, have been part of some of the major initiatives, such as Remote Mentorship Program, creating the roadmap for the launch of applications such as the DDE, creation of dashboards under data analysis initiatives, course and curriculum development under digital content initiatives, charting out ways to increase website traffic, and subscription of social media channels such as YouTube under Communication projects, etc. The tasks that they have accomplished in a span of eight weeks during these uncertain times have been phenomenal. This motivated Pratham to scale up the initiatives under the Internship Programme, and ensure that the September cohort is exposed to continued exposure to education’s new normal. This time around, with 60 new interns, the cohort is extremely diverse: there are interns with close to two decades of work experience, as well as interns who are still in high school. The interns have joined Pratham from eight different countries, and multiple cities across India. We only hope to sustain the scope and scaling of the Internship Programme.

Work in a remote setting – as we are all currently experiencing – is a different experience altogether. Internships are no different. Hence, the digital team at Pratham hoped to structure the programme in such a way which would promote curiosity, innovation and provide support and resources to extremely talented individuals who have participated in the Internship Programme.